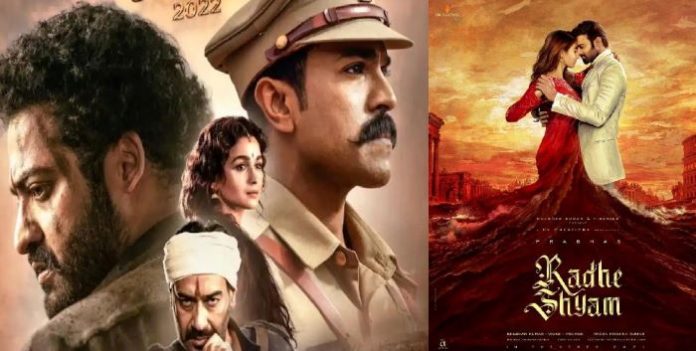 The new year 2022 is going to be very special for the cinema world. Because this is happening for the first time in history that not 1-2 but many big budget films are releasing in a single year. Producers from Bollywood to South have already booked the release dates of next year from January 26 to Holi, Eid, August 15, Dussehra, Diwali and Christmas. Just if the next wave of COVID does not come, then 2022 is going to be a bumper year for the film industry. know Big Budget Upcoming Films 2022 in India List.

Due to Corona, the theaters may have been deserted for about one and a half years, but if we look at the schedule of next year’s films, then next year there is a huge bang in the theaters. Bollywood is all set to welcome the year 2022. So let’s have a look at the list of 10 big budget big films to be released in the year 2022.

South superstar Jr NTR and Ram Charan are in lead role in RRR movie. It is a big budget period action drama movie which will be released in Tamil, Hindi, Telugu, Malayalam and other languages. Alia Bhatt is making her Telugu debut with this film. Along with him, the Singham of Bollywood Ajay Devgan will also be seen in this film. Rajamouli is famous for his period films and excellent VFX, the Bahubali series is a fine example of his brilliant filmmaking. It is being told that the budget of this film is close to 400 crores.

Another great film of South films superstar Prabhas is coming, whose name is ‘Radhe Shyam’. People are waiting for this film for a long time. In this film, Pooja Hegde will be seen in the lead role along with Prabhas. Directed by Justin Prabhakaran, the film is being made with a budget of Rs.350 crore.

Akshay Kumar is once again bringing the film ‘Prithviraj’ in the year 2022 to entertain the people in a bang. Before this film, world beauty Manushi Chillar is debuting. She is playing the character of Princess Sanyogita. According to media reports, its budget is 300 crores.

Alia Bhatt is going to be seen in the lead role in Sanjay Leela Bhansali’s film Gangubai Kathiawadi. Ajay Devgan will also be seen sharing the screen in this film. The budget of the film is said to be around 80 crores.

Fans are quite excited about Bollywood actor Ayushmann Khurrana’s upcoming film ‘Anek’. He is playing the character of Joshua in this film. Anubhav Sinha is directing the film ‘Anek’.

Director Ayan Mukerji’s much-awaited film ‘Brahmastra’ has been in the news ever since it was announced. Ranbir Kapoor, Amitabh Bachchan, Alia Bhatt, Mouni Roy, Dimple Kapadia and Akkineni Nagarjuna will be seen in the film ‘Brahmastra’. The budget of this film is being told beyond 300 crores.

Ranbir Kapoor and Vaani Kapoor starrer Shamshera is also ready. It is a period drama movie, in which Sanjay Dutt will be seen in the role of the villain. This big budget film is directed by Karan Malhotra.

Aamir Khan, Kareena Kapoor and Naga Chaitanya Akkineni are in lead roles and the film is directed by Advait Chandan. Made with a budget of 80 crores, this film is a Hindi remake of the Hollywood film Forrest Gump released in the year 1994.