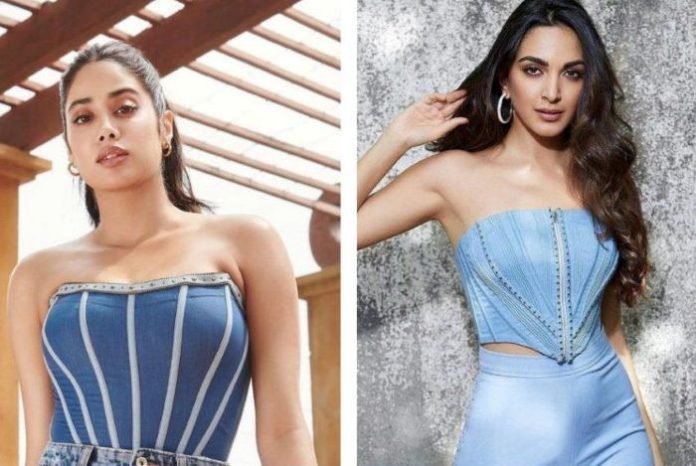 Denim on Denim look can be said to be the go-to look of Bollywood celebs and many times Bollywood divas have been seen adopting this look.

Many actresses like Kiara Advani, Deepika Padukone, Ananya Pandey have inspired people to style denim with denim on denim look. The actress has given a cool and casual touch to her look with denim jeans with a shirt, corset top or jacket. While styling denim, you can also take styling tips from these looks of the actress.

Kiara Advani recently adopted a denim on denim look for the promotion of the film Jug Jug Jio. The actress styled an asymmetric strapless denim top with chain in front and silver metallic button detailing with light blue paired jeans. With this, Kiara wore silver footwear and white hoops. Keeping her look casual, the actress did light makeup.

Janhvi Kapoor styled ripped denim jeans with a denim strapless corset top for the promotions of her film Good Luck Jerry and the actress’ look is perfect for going out to brunch with friends. The actress has kept her look minimal according to the season. She made a ponytail in her wavy hair and kept her makeup flawless and light.

Ananya Panday styled a full on denim outfit during the promotions of the film Gaheriyaan. The actress styled high rise denim pants with a denim buttoned bustier top and denim crop jacket. With this look, the actress gave her hair a curl look. The actress completed her look with nude pink lips and brown hoops.

Deepika also adopted an all denim looks during the promotions of the film Gaheriyaan, following the favorite street style looks of the Gen Z generation. This look of the actress was quite bold. She styled denim joggers with a dark blue denim bodysuit which was very low rise.

Like celebs, if you also want to adopt a denim on denim looks, then you can style denim over size shirt, jacket with denim. Apart from this, you can also style a denim knee length dress with denim boots or denim sandals made using denim.