Home TRAVEL This Temple of The Goddess is Unique, The Empty Lap is Filled... 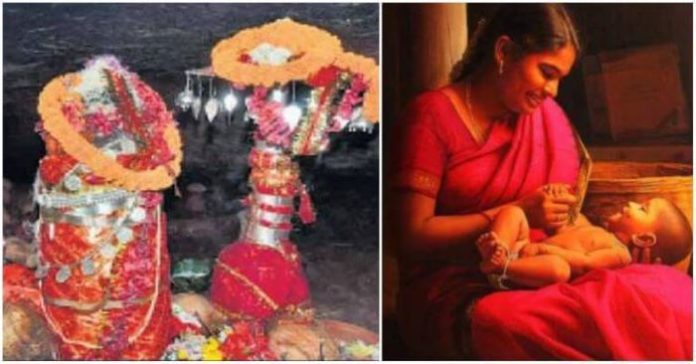 Beliefs, superstitions and beliefs are settled in every corner of India and a living example of this is such a unique temple of Mother Goddess, whose doors open for darshan only once in a year. The temple of Mata Lingeshwari, located in the Kondagaon district of Chhattisgarh, is famous throughout the country for its recognition. It is also known as Alor and Lingai Mata Temple. This is one such temple of Bholenath, where Shivling is worshiped in female form. It is believed by the people here that whoever comes to this temple to get a child, his empty lap gets filled within the same year.

Every year the doors of this temple are opened for the devotees on the Wednesday coming after the Navami of Shukla Paksha in the month of Bhadrapada. Devotees worship and offer darshan to the Mother Goddess throughout the day. After this, in the evening, the doors of the temple are closed again for a year by resting the stone rock. The unique thing about this temple is that devotees have to crawl here for darshan.

There is Such a Belief Here

There are many amazing beliefs about this temple. The experts here say that most of the devotees who come to this temple ask for a vow to have a child. According to the custom here, the couples who have come to get children have to offer cucumber to the Goddess here. After getting the cucumber back in the prasad, the couple has to cut the cucumber into two pieces by incision with their fingernail at the same place and then both have to take the prasad in front. It is believed that by doing this the couple’s empty lap gets filled in a year.

There is also another belief that when the doors of this temple are opened after a year, some signs are found here, seeing which the priests predict the future of the next year. If the footprint of an elephant is made, then progress, if the hoof of a horse is a sign of war, the sign of a lotus is an increase in wealth, the claw of a cat is a sign of fear-destruction, the mark of a hen’s foot is considered a sign of famine. .

How to Reach: Reach Kondagaon by covering a distance of 242 kms from Raipur railway station and 67 kms from Dilmili railway station, from there you will get the means to reach the temple.