Home HEALTH Benefits of Eating Tuna Fish and Side Effects 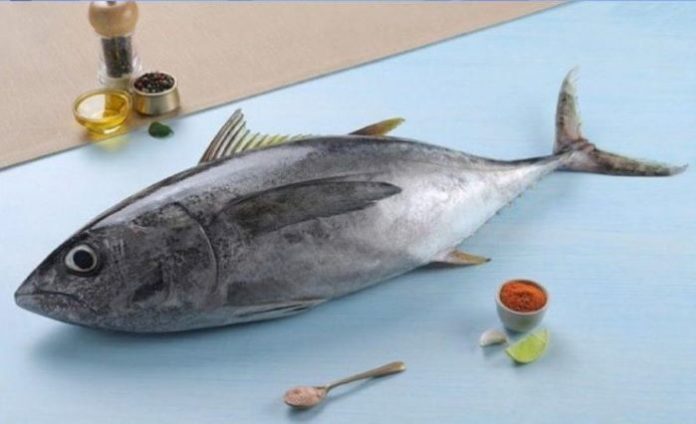 Fish lovers all over the world like tuna fish and enjoy eating it. From sushi to cutlets or salads, tuna fish can be eaten in a variety of ways, and it also tops the list of healthy eaters. All the information about delicious and healthy tuna fish like what is tuna fish, benefits of eating tuna fish (tuna meaning) and how to eat tuna in desi style (tuna fish name) read in this article.

What is Tuna Fish

Tuna fish is a saltwater fish that is used in a variety of cuisines from Asia to Europe and Australia. There are many species of tuna fish such as blue fin, yellow fin, bullet tuna etc., but two varieties of tuna are found most in the market – skipjack and albacore. All species of tuna mostly migrate from one place to another in the sea. They are easily found in the Atlantic Ocean, Black Waters and Mediterranean Sea and they are also much easier to catch than other fish. Usually these fish live for three to five years, but some of them live for many years.

Due to the high demand for tuna fish in Japan and Australia, their supply is also very high in these countries, but its taste and properties are so much liked all over the world that these fish are now reaching the verge of extinction.

Tuna fish is high in vitamin D and is a great way to get vitamin D through diet. The body provides 50 percent of a day’s vitamin D needs from 3 ounces of canned tuna fish. Apart from this, iron, vitamin B6, potassium, selenium and iodine are also present in tuna fish. It is also rich in omega 3 fatty acids.

Fish has always been beneficial for health and this is the reason why experts advise those who do not eat fish to eat fish oil when needed.

Tuna fish is rich in vitamin C, zinc and manganese, which are antioxidants that protect the body from free radicals. Free radicals are products produced by the metabolism of cells in the body, which cause various diseases. Apart from this, selenium is also abundant in it and this fact also makes tuna fish immunity booster.

The yellow species of tuna fish has good levels of vitamin D and is useful for absorbing calcium needed by the body for bones. Apart from this, tuna is also high in magnesium and phosphorus, both of which are essential for bone health.

Tuna fish contains many nutrients that are considered essential during pregnancy such as vitamin D, protein, several types of long chain omega 3 acids, iron and vitamin B12. These nutrients prevent complications during pregnancy and also help in the growth of the baby.

Antioxidants present in tuna fish are able to protect against cancer. It has been revealed in many researches that eating tuna fish regularly provides relief from breast and kidney cancer.

Tuna fish has very low levels of both calories and fat and is high in protein. The omega 3 fatty acids present in this fish stimulate a hormone called leptin in the body and this hormone balances the body’s intake of food and the desire to eat food. This reduces the urge to overeat and the person eats only as much as his body needs.

In research, it has been proved that omega 3 fatty acids help in stimulating leptin.

Just as all nuts are high in selenium, tuna fish is also high in selenium. Selenium activates a protein called elastin present in the skin and it maintains the tightness and smoothness of the skin.

Vitamin B complex present in this fish also keeps the skin healthy.

Metabolism is also correct by eating tuna fish and it gives energy to all the organs of the body and keeps them active.

How to Use Tuna Fish – How to Eat Tuna Fish

1. Tuna fish can be eaten both can and fresh.

2. Tuna fish can be eaten in many ways.

3. Fresh tuna can be roasted Indian style and cooked with curry.

4. Tuna steaks can be eaten as a fish fry.

5. Tuna fish found in cans is pre-cooked, so fitness lovers can eat it straight with light tossing.

Canned tuna can also be used for stuffing rolls or wraps.

6. Canned tuna can be roasted Indian style and enjoyed directly with roti or by stuffing it in sandwiches.

7. It can also be enjoyed by making cutlets. It is a good and yummy option to use it in place of aloo tikki or chicken tikki in the bird too.

According to the FDA, tuna fish should be eaten two to three times a week. If you are eating white tuna, it is recommended to eat it only once a week because of its high mercury content. A typical adult can eat one serving of tuna fish, or around 100 grams (about 4 ounces) at a time. Canned tuna fish contains significantly less mercury than fresh tuna.

If eating tuna fish is beneficial for health, then it also has some side effects, so to eat it regularly in the routine, it is important to know the serving size, how much should be eaten by the experts.

1. Tuna fish is rich in mercury. Mercury is a neurotoxin and after reaching the body affects both the brain and the nervous system. This is the reason why pregnant women are rarely advised to eat it. In such a situation, if you want to eat tuna fish, then it should not be eaten without asking the expert.

3. Because tuna found in a can contains 200 to 300 mg of sodium, eating it can be harmful for patients with diabetes, blood pressure or heart. Such people should eat fresh tuna.