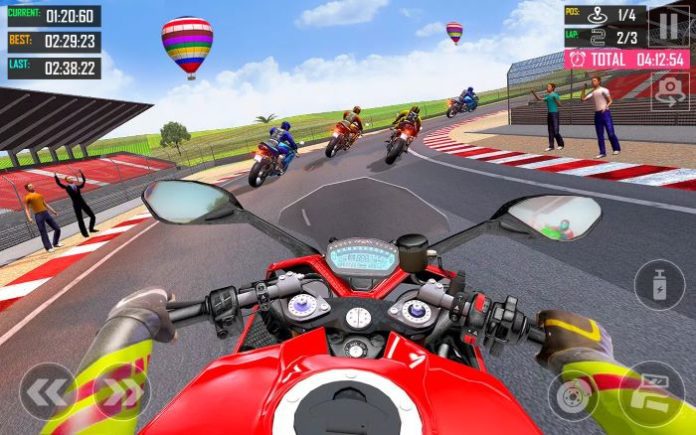 Today I am going to give you information about downloading 11 best bike racing games, so if you also want to download bike racing game for your time pass, then definitely read this article completely.

The best way to time pass in Android phone is to play games that will make you feel good and you will also run out of time, that’s why today I have brought this article in which I am going to tell you about the best bike racing games.

Because you will find thousands of bike racing games to download on the play store but only a few of them are good and most of the games are absolutely useless.

This is a very old and famous bike racing game, which you can guess from the fact that it has been downloaded more than 100 million times so far.

In this you will get more than 10 unique super bikes and many tracks will also be found, this is a lightweight bike racing game which is only 21 MB, this game does not get much features but still it is very much liked by the people.

Bike unchained 2 is very best bike game which is a game created by Redd bull this game was released in 3 Sep 2018 on play store.

This game is a mountain biking game and it has very high hills and you will also see snow on the way which will make your gaming experience much better.

This game is a very famous bike game which is a game created by Digital Tales S.R.l. This game was released on 21 July 2016 for android.

This game gives you the experience of realistic moto bike racing. In this championship of super bikes is played, in this you will get to see many company bikes like Kawasaki, Honda, Ducati, Yamaha, BMW etc. You can drive according to your choice.

In this you will get option to change 10 different controls and it has 4 different modes quik race, Time, Test ride, Former world championship.

This game is super high speed bike racing game which play race in traffic it has shooter bikes which can shoot super bikes and many variety of moto racing track it has unique design bikes which you can unlock and play The camera has many angles that you can change.

Traffic rider is very popular bike game and it is endless motor bike game in this graphics is very good and bike sound is real recorded which gives you complete realistic bike riding experience.

It has career mode, first view camera angle with more than 70 missions and 29 different motor bikes and this game gives 19 types of language.

Traffic Rider is very much the best game because I have experienced this game by playing it myself, their graphics look very realistic, this game was released on 9 January 2018.

It has 4 different camera angles, with the help of which you can choose the angle you want and 4 different controls, it has 16 different motor bikes and many modes also include Escape Mode, Daily Bonus Mode, Private Mode.

Moto X3m bike race game is one of the best gravity game that keeps spinning in the air for a long time and you have to drive straight with your controls. This game is a game created by Ace Viral and it was released long ago on 18 Aug 2015.

The game has more than 170 stunning levels and many bikes that are already unlocked.

This bike game is a very good and exciting game, this game is a game created by Mobadu and it was released on 30 January 2017 This game will make you feel like cartoonist type.

In this game you will find everything in block type and the sound of this game is really great, in this you will get to see 3 modes Race Mode, Demolition Mode, City Mode.

It has 3 unique camera angles which will enhance your gaming performance and blocky moto has 3 types of motor bikes like Ride Motocross, Speeder, Police Motor Bike.

Trial xtreme 4 is a unique bike race game and you are going to have a lot of fun playing this game, this game is a game created by Dimenda Inc.

This bike race game is a village based on gravity and has lots of Pahari as and water tracks whose 3D graphics look very realistic.

In this you will get more than 200 levels and there are many modes also Swag Mode, PVP Racing and by upgrading the bike in these, you can increase the ability of the bike and 200 awesome costumes will be seen.

This bike race game is a very old moto racing game, you can guess from the fact that it has been downloaded more than 100 Million and was released on 22 Jul 2011.

This bike race game is very high speed, in this you will get only one map but you will get to see very nice view like desert, city, bride, forest which will make your journey much better.

Bike race free is a very great bike game, you can guess it from the fact that it has got 4.3 stars, this game is a game created by Top Free games.

In this you will find more than 100 great tracks and many exciting levels and the graphics are very good and you will have a lot of fun while playing it.

So in this article, we told you about the Best Bike Racing Game Download, which you can download very easily by the download button given in the article.